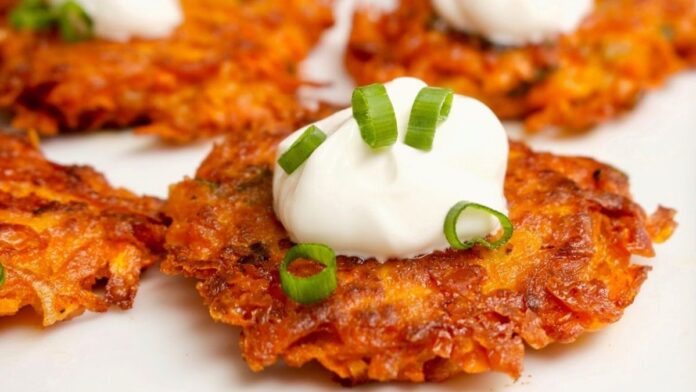 Sweet potato latkes are the best snack item to have if you are a fan of crispy, savory sweet potatoes. This is a delicious recipe with a combination of eggs, sweet potatoes, and green onions, making for the tastiest flavor pallet. It also takes a minimal ingredient to make and doesn’t take long to cook either. If you follow this recipe and get the ingredients right, you will make 24 of them, the perfect amount for a large gathering or even a small party.

The making of these delicious sweet potato latkes is easy. First of all, you will need to have the ingredients ready. You will need sweet potatoes, all-purpose flour, some eggs, green onions, salt, and lastly, some oil for frying. To start making the sweet potato latkes, you need to grate the potatoes in a bowl and drain any excess moisture they might have. Add the flours in and mix until they are fully coated in the potatoes; add in the rest of the ingredients except for the oil and stir them in. then take a heavy skillet and add the oil in over medium heat.

After the oil heats up appropriately, use a tablespoon to pour the latkes in and use a spatula to press it in. Make sure not to put too many of them in the flour or reduce the temperature and make them greasy. Cook each side for 2 minutes until they are golden brown, and serve it hot straight from the skillet.

3 Use 1 tablespoon of sweet potatoes for each latke. When the oil is hot, add the latkes. Press the latkes into a circle using a spatula. Cook for 2 minutes on each side or until the latkes are golden brown. Remove the latkes from the oil and serve. Add vegetable oil as needed to cook all the latkes.

And there you have it, the perfectly crispy and delicious sweet potato latkes to make any time you want to have a nice sweet potato snack. It makes enough to serve at an afternoon outing or even for a movie night. It’s a perfect snack for hangouts with friends and family. Let us know what you think about this dish, and if you do make it, all feedback is welcome.

Hi ! I am Aaron, an entrepreneur by profession. I love to eat, and I also love to cook for myself in my busy life. I shared some great cooking recipes with ordinary potatoes. I hope everyone likes the potato recipes.

It is difficult to find people who do not like potatoes. For potato lovers, this blog is about all kinds of potato recipes.
Contact us: [email protected]